La Patagonia is an authentic experience of traditional Argentine flavours in the heart of Camden served by its owners.

We use a real charcoal/wood grill to cook our meats and vegetables. In addition, we have a complete menu with many classic dishes offered which are not from the grill such as pasta, fresh milanesas (escalopes) and our own recipe of chorizo sausages. Apart from Argentine Premium cuts of Sirloin, Rib Eye and Lomo (all from grass fed cattle) we also offer a very tasty Short Rib which is our very own style “Asado de Tira”, Skirt Steak (entraña), Pork Neck fillet (bondiola) and Lamb steaks. We have a premium selection of some of the greatest wines of Mendoza and La Patagonia.

The name La Patagonia was adopted as the host’s grandfather was one of the first Argentine writers to explore the Argentine part of the Patagonia wilderness in the 1920’s and wrote a book of short stories called La Tierra Maldita (The Forbidden Land). Photos of his exploration are hung in the restaurant.

Adrian Cocco was born and grew up in the exciting Argentine city of Cordoba, which was awarded the Cultural Capital of the Americas in 2006.

He first became interested in food at about the age of 12 and his earliest cooking influences were from his mother, who used to love cooking for her family. At the age of 16 he had his first job in the kitchen of a traditional restaurant in Cordoba, where he enjoyed learning the skills needed to become a professional chef. After that, he went on to train at “El Casino de la Fuerza Aerea” in Cordoba, “Casino” in Mar del Plata and the High International School Hotel in Buenos Aires. The excellent training he received at these establishments meant that by the age of 18 he became the head Chef of hotels in Argentina and then later in Spain. He is now the head chef at the award winning La Patagonia restaurant in Camden, where he has created an extremely popular menu, of traditional Argentine dishes, with his own unique style. 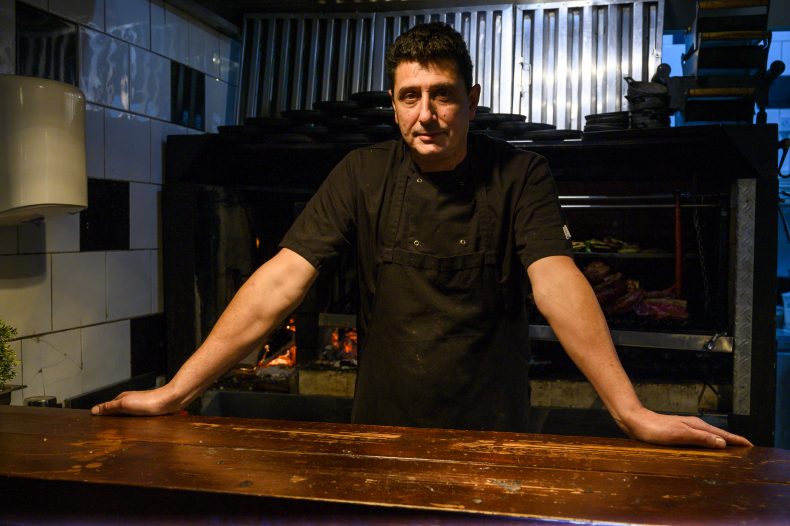